So I took the girls to Mall at Millenia, exit 78 off the I4, it is swish, or as the girls said ‘really nice’.  The entrance  has a  flowing water feature and te concierge desk, but we came in through Bloomingdales so we could find the car afterwards!

The girls thought there were good shops!  We went in Bloomies, Macys, Tiffanys, Gap, Abercrombie and Apple.  One of the girls got her make up done at the cosmetic counters.  We stopped at eh food court and had a Haagen Dazs smoothie.

Their overall impressions were that it was a leisurely shop, the mall was smaller than expected but with good shops and lovely restrooms.  Lots of space and great places to sit and relax.  Also loads of parking.

When we were planning our most recent trip to Florida one of my friends had a massive list of things she wanted to do, while the other had just one – a big American buffet breakfast!

So we went to the Corral. First impressions from the girls were that is was huge – lots of food on offer, lots of variety, something for everyone.

They enjoyed the lovely crispy bacon, scrambled eggs and hashbrown skillet. I also had corn beef hash. Compliments as well for a decent cup of hot tea. We all enjoyed some fresh fruit, fruit juice and some breakfast cake – I had a small cinnamon roll and an oatmeal and raisin cookie – still warm from the oven.

The girls were a little disappointed in the plastic plates and mugs but everything was clean. Overall they felt it was good food and good value for money particularly as drinks are included in the price at breakfast.

The next day I took the girls for a real treat at Walmart! We go to the super size one on US27 just north of the 192. It sells just about everything and is open 24 hours.

We spent 2 hours just mooching round the store. Things to note, there is an International food section if you just can’t survive without PG tips or Cadburys. The hot food counter is very good although the girls said I had to mention the grumpy chicken man. It’s great for cheaper Disney souvenirs and all kinds of t-shirts. We bought some Halloween costumes. There is a good pharmacy and big electricals section.

Good things to buy – water to take in the parks; ponchos; spray fans; underwater camera if you are going to the water parks.

When we were paying it took a while as our server, Lisa, was very chatty and interested in the English culture.

Something that’s good to know – if you buy something keep the receipt and if you have any problems you can return the item to an Asda back in the UK. We had to do this once with a laptop and had no problems getting a refund. 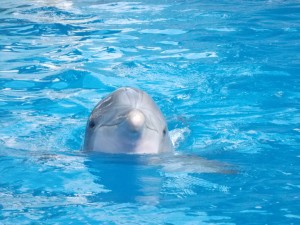 After establishing that my friend would not go on any of the rides at Islands of Adventure after I allegedly tricked her onto Everest at Animal Kingdom, we decided that Seaworld was more up her street so we set off to Seaworld.

We saved time by  using the Self Service ticket machines and cut the queues (lines).  Once inside we grabbed a map and headed straight to the Dolphin Nursery.   What a start to the day.  There were quite a few dolphins with babies of different ages and they were really enjoying the attention.  They kept popping up out of the water looking directly at us and they were jumping out of the water – we spent a good while just watching them playing and watching us – plenty of photo opportunities.

From there we headed over to the kiddie section – where my friend took her life in her own hands and rode Shamu’s Express – apparently, it is not just for children – it is for adults too!!  She rode on the front sheet and enjoyed it.

Next we went to the Wild Artic and waited for the helicopter ride to open.  We decided  to take the rocky ride and given my time again, I would have taken the other ride as I felt quite nauseous afterwards!  We enjoyed seeing the Beluga Whales.

We headed to Shamu’s stadium ready for the first show of the day.  I’m not that keen on the animal shows but as my friends wanted to see it we went along.  We decided to sit outside of the splash zone and had a good view of the orcas and the screens.  As we waited for the show to begin, the dark clouds were gathering in the distance and sure enough 10 mins into the show it was ‘paused’ due to the inclement weather in the area.  Seaworld started to show a video while the audience waited for the show to recommence.

We decided to cut our losses and went across to the Underwater Shark Grill to have some lunch.  I had the tempura shrimp with sticky rice and a bottle of bud light – awesome.  We had a lovely server and while we were there in the dry watching the fish we could hear the thunder and lightning outside.  After a lovely meal we donned our ponchos and set off round the park.

Pets Ahoy was open and an indoor show – not sure if the audience is usually that big on a sunny day but we did enjoy the show where all the ‘performers’ are rescue animals which as the proud mummy of a rescue cat and dog at home in the UK I thought was very commendable and was something that I hadn’t previously known about Seaworld.

Next I learned how to feed a Ray – amazing, I had no idea there mouths were on their tummies.  It cost $5 for a tray of shrimp to feed to them.  They are really friendly and you can stroke them in the water for free without having to feed them – but I really enjoyed it.

Afterwards my friends went to Dolphin Cove to feed the Dolphins – $7 for a tray of fish.  There are alloted feeding times and the birds start to queue up on the roof of the feed station.  I didn’t feed the Dolphins so I could take some photos of my friends – there are official Seaworld photographers but you are not guaranteed that they will capture you.

So despite the inclement weather in the afternoon (we got good value out of our $1 emergency ponchos that day) we had a great day.  We recommend it for all ages, especially young children and seniors! 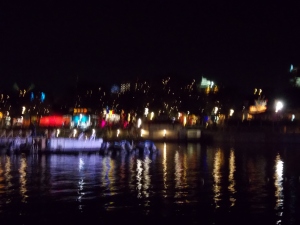 So my friend had been told that we should go to Downtown Disney in the evening and she really wanted to have a cocktail while sitting out listening to live music. 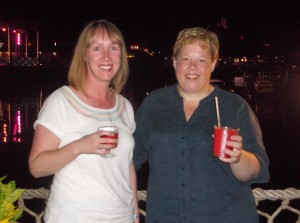 We parked near the Dinosaur Restaurant and started with a browse of the Disney shops – managing to buy a number of gifts to take home.  There was live entertainment going on with a Disney Party going on in the marketplace which the kids seemed to be loving and a number of parents were also getting down to the beats.

We decided to try a frozen Margherita while sitting overlooking the lake, there were also chilled wines and beers on offer as well as soda for the driver (me).  Then we decided we wanted a hotdog which actually was very difficult to locate!  We walked all the way from the Marketplace through the live music and bars area past the Fish and Chip shop and a few shops including a very good surf clothing and shoe shop.  We then went past Planet Hollywood and the Disney balloon ride, along to the House of Blues and Disney Quest.  Still no hot dogs so we decided to try our first ever Weiner pretzel!  Sort of like a hot dog sausage roll.  We ate these outside while listening to live music – a couple of guys on guitars – very good.

All in all we had a great couple of hours at Downtown Disney – it is a safe and entertaining place in the evening for all ages.  There are lots of restaurants – we had eaten at lunchtime – and lots of bars.  Lots of shops – not just Disney themed and also a large cinema which seems to now do eat in dining – which we haven’t tried yet.

Another thumbs up from the girls and a tick in the box for having a cocktail while listening to live music.

We went to Super Target at Rolling Oaks on the way home from Celebration.  Just off the US192 near the junction for the toll road 429.  Part of a nationwide chain, this Target sells everything from Food to make-up, electronics and clothes.

The girls loved Super Target because it is so spacious, clean and easy to navigate.  The store also houses a pizza hut and Starbucks for any hungry children or bored husbands!

Near the entrance they have a few racks of $1 bargains – these are usually seasonal and over various visits I have picked up all sorts of bits and bobs like Snoopy stationery, The Hungry Caterpillar children’s cutlery (flatware) and a halloween pop up book.

Hubby picked up some sport sunglasses which he insists look just like Oakleys – they cost $20 so you can make up your own minds on that.

I think the baby/children’s section is particularly good.  I had been tasked with trying to source some Ellas Organic foods and Target did not disappoint with a good range of the products available.  I also managed to pick up a Burts Bees Organic cotton baby outfit and a playmat for the villa suitable for all ages.  I was in this section for so long my friends lost me and I got told off.  One of their top tips for my blog – make sure you arrange a meeting place (that’s how big the store is).  Their other comments were “it’s big and sells everything!”

After a busy Sunday at Animal Kingdom we decided we needed a gentler paced day and spent the morning enjoying the sun by the pool.  We decided to be ladies that lunch and headed off down the US192 to Celebration.  After browsing the shops on the main street and spending quite a while queuing in the Post Office (lovely Art Deco building but DON’T GO AT LUNCHTIME) we decided to try the Imperium Wine Bar for lunch. 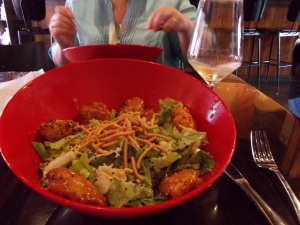 ged to eat half and took the other half home for tea.  This time I ordered the Ying Yang Salad with Chicken – I can honestly say it is probably the best salad I have ever had in my life.  My friends chose the Chicken Caesar Salad and a half cheddar jack chicken flatbread (which took up the whole plate).  As you would also expect they have a great wine list.

With friendly and responsive staff, clean, cosmopolitan surroundings with both indoor and outdoor seating, we would all recommend it as a lovely place to stop for lunch or a great glass of wine.  They have a happy hour with $2 off wine in the evenings and on many nights there is live music on offer.  Visit their website for the latest information and directions regarding their location: http://imperiumfoodandwine.com/index.html