If you turned up at the Peabody Hotel on I Drive at 11am and 5pm you used to be able to watch the resident ducks get the red carpet treatment as they either arrived or left their lobby fountain home.  Guided by “Duck Masters” they were directed with walking sticks.  They even had their own private elevator which linked their lavish rooftop enclosure with the lobby fountain that was designed just for them.

The tradition ran from 1986 right through to October 2013, when the tradition ended as the Peabody was sold and became the Hyatt Regency Orlando.

We used to enjoy a trip to see them on the way to the I Drive Outlet shopping – stopping in the air conditioned lobby with some toast and coffee for breakfast they were a joyful start to the day.

Hopefully, the Peabody ducks are all enjoying their retirement, at the time it was reported that they were going to be cared for on a private farm. 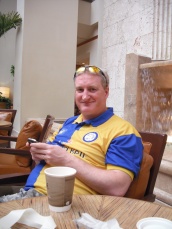